I have a backup sync program on local server. I have an ssh password less login set up, and I can run commands on an external server in bash script doing:
ssh root@server2 "sync; sync; /sbin/shutdown -h now"
How do I run multiple commands in bash on a remote Unix or Linux server? What is the best way to SSH in and run various unix commands in a bash shell?

How To Run Multiple SSH Command 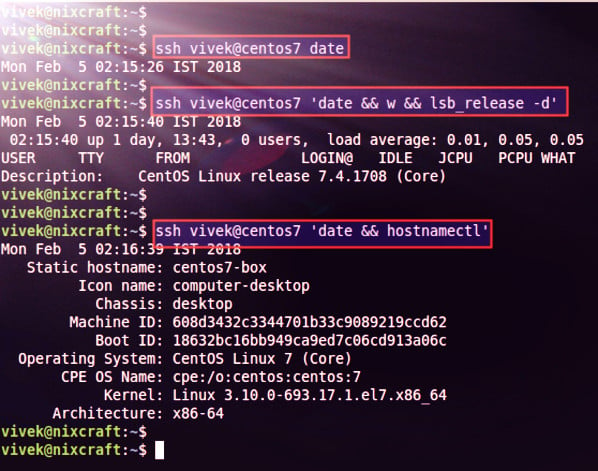 The here document syntax tells the shell to read input from the current source (HERE) until a line containing only word (HERE) is seen:

Here is another example to run a multiple commands on a remote system:

Pipe script to a remote server

Finally, create a script called “remote-box-commands.bash” as follows on your local server:

How to ssh to multiple servers and run commands

One can use simple bash for loop as follows. In this example, run uptime command on three Linux server named box1, box2, and box3:

Create a shell script as follows:

Please note that the -t option will get rid of "Sorry, you must have a tty to run sudo/insert your-command-here" error message. You can also use pssh (parallel ssh) for executing ssh in parallel on a number of Linux/Unix/BSD servers. For more info see your ssh and bash command man page:
$ man ssh
$ man bash
$ man sudo
And there you have it, multiple bash shell command run using nothing but ssh client/sever model. A better option is to use the ansible tool.